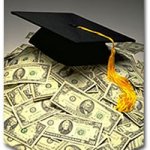 The Bankruptcy Abuse Prevention Act of 2005 made student loan debts non-dischargeable through bankruptcy. Why do you ask?

Nonetheless, there were put into place a couple of programs for those facing a partial financial hardship. The first program was the William Ford Foundation, which provided an income contingent repayment plan. This program is available for those who choose to take lower paying jobs such as in public service. There is also the Income Based Repayment Program. With this program, your payments are based on your income. After 20 years, the amount still owed is discharged; however, there are still huge limitations on how you can qualify to remain in this program.

Of course, things did not go the way Congress had intended. Federal government spending on higher education could not and cannot keep up with the ever-increasing costs of earning a college degree. Federal grant programs failed to cover the entire costs and, as a result, students began looking to borrow money from other sources (privately funded student loans) once they had exhausted the federal government-insured student loans. This left college graduates with very high student loans to pay back.

In the Middle District of Florida where I practice, and encompasses the Jacksonville and Orlando divisions, an all or nothing approach has been taken towards the dischargeability of student loans. You either qualify 100% for your student loans to be discharged because of an extreme circumstance, which has a very high level of proof, or you do not. There is no middle ground.

However, Representative John Delaney introduced bipartisan legislation last Friday that would make student loan debt dischargeable through bankruptcy. So everything might be changing in 2017! The bill has been named the Discharge Student Loans in Bankruptcy Act (H.R. 2366).

In 2016, according to the Federal Reserve Bank of New York, the amount of student loan debt reached an all-time high of $1.3 trillion dollars.

At the Law Office of David M. Goldman, PLLC, we are always looking at creative methods to help our clients deal with their overwhelming debt burden. Contact our office today for a free initial consultation at (904) 685-1200. There are a lot of options available. The trick is finding the one that best fits you and your life. We are here to help you put your financial health back on track.