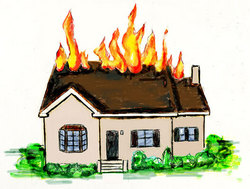 According to Davidson County Sheriff David Grice, a Denton, NC man facing foreclosure hired a Virginia man to burn his house in order to collect the insurance money. The fire occurred on August 16 and fire investigators became suspicious of foul play when they learned that a flammable liquid had been used to start the fire. During the course of their investigation, police and fire officials were able to determine that the homeowner hired the other man to burn his home down before the bank repossessed it.

This is not the most effective way for homeowners to avoid a foreclosure lawsuit. If you are facing a Florida Foreclosure Lawsuit