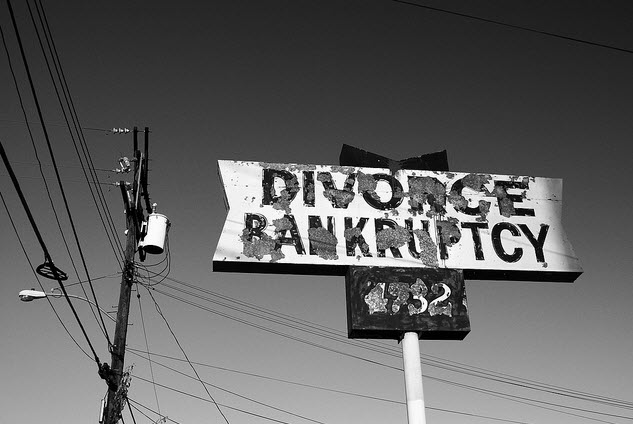 According to Marianne Culhane’s chapter in the collaborative book, “Broke”, 36% of those filing bankruptcy considered divorce or separation as a result of the stress. This is not at all surprising as people often cite “financial difficulties” as a reason for separating. 36% is an enormous number. Less alarming is that the number of people who actually did divorce after bankruptcy was 18%. Still, that’s just short of one out of five couples.
Florida has become well known in the divorce world, being home to eleven of the top fifty cities with the highest divorce rates in the United States. If you live in Panama City, there is a 16% chance that you’ve been divorced before -the highest rate in the country.

However, Florida also filed the second highest number of bankruptcies in the United States in 2010. While this doesn’t prove that the bankruptcies caused the divorces, I think it’s safe to assume that one has some effect on the other.
If you are considering either bankruptcy or divorce, contact a Jacksonville Bankruptcy Attorney to discuss your situation and objectives and see what makes sense for you